On one of my early plein air paint-outs with the group we met at Griffith Observatory (opened in 1935) in Griffith Park, Los Angeles, CA.  We meet early in the day and the Observatory doesn't open until noon so I thought we would be about the only people there.  Wrong!  Besides lots of hikers, dog walkers, deliveries, and the school busses of kids, there were several television news crews doing live reports.  It turned out to be the height of the March solar storms.  Since they can disrupt technology on Earth, the news crews were there to report on possible power and GPS outages, and airline flight rerouting.

I stayed out of the reporters' way and set up where there was a nice view to try for my watercolor.  I'm posting my painting (9"x12" with a narrow border), and a photo of my view.  I also got a nice shot of a fellow painter just finishing up her oil of the hillside and rooftops.  And I'm thrilled about the last photo treat which you'll have to read about below! 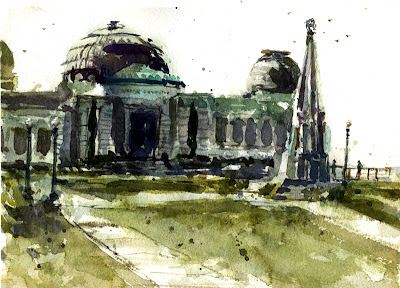 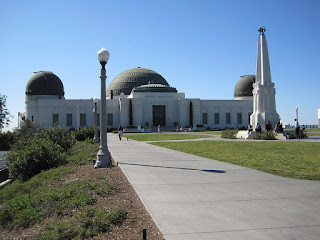 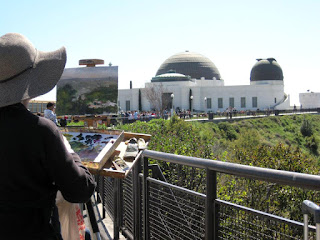 I'm so happy Aaron Kiely gave me permission to post his photo here!  It is by far my favorite of the hundreds of shots I saw of the space shuttle Endeavour's final flight over Los Angeles landmarks on September 21, 2012.  What a gorgeous and dramatic photo of the planes!  The sharp Observatory in the foreground with the crowds, and hazy downtown Los Angeles in the distance...Love it.
Thank you Aaron! 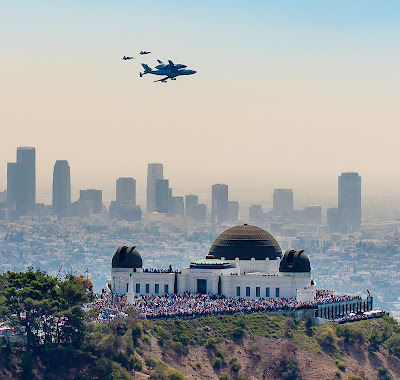 Posted by Sherry Schmidt at 6:37 PM