I met my plein air painting friends at the Lummis House on Saturday.  The house was built by Charles Lummis in the late 1800s and is a Los Angeles Historic-Cultural Monument, and on the National Register.  Lummis was quite an interesting character.  He was working at a newspaper in Cincinnati when he was offered a job at the Los Angeles Times so he decided to walk the whole distance to California (2200 miles).  His walk took almost five months and he published a book about his journey.  Besides being a journalist, he was also a poet, photographer, Indian activist, librarian, historian, and established the Southwest Museum here.

Lummis built his remarkable home out of arroyo stones, and named it El Alisal for the California Sycamore trees that surround it.  When I was first at the house years ago there wasn't even a fence around it.  Now it is fenced, is a museum, and has abbreviated hours.  It's such a distinctive looking structure, all stone, surrounded by a natural landscape of native plants and the sycamore trees.

There were a lot of interesting views to paint of the house.  It has some distinguishing characteristics like the circular tower which I wanted to include.  As I anticipated painting this stone house I was concerned about how to paint small boulders and not have them look "cut out".  Sycamore trees are also a challenge with their light colored trunks and mottled bark.  It was a lovely day to paint under those trees.  I'll post my painting and couple views of the house. 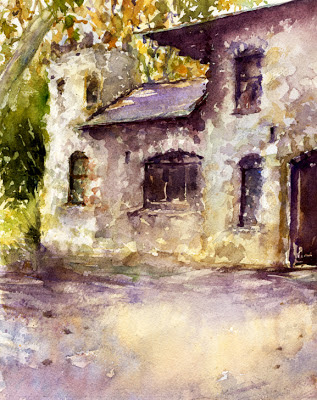 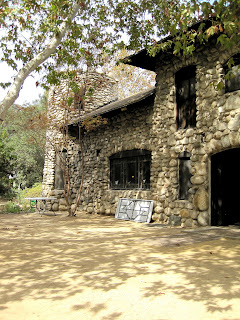 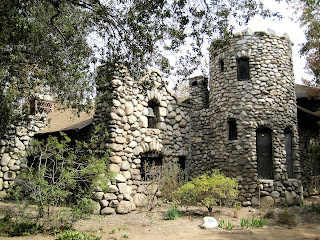 Posted by Sherry Schmidt at 4:26 PM