The location of the Virtual Paintout for March 2014 was Slovenia.  Bill Guffey created the Virtual Paintout and chooses the month's paintout location from cities or countries the Google Street View vehicles have covered.  Artists submit their paintings online to Bill and he posts all of them on Facebook and the Virtual Paintout blog.  It's always a lot of fun to see what views other artists have found, and of course there are a variety of styles and media.

I didn't know what to expect to see in Slovenia.  It turned out to be a beautiful part of the world to look around.  The portion of the capital city of Ljubljana that I saw looked very attractive and tourist-friendly.  Lots of pretty bridges and side-walk cafes.  Since I was looking for something to paint, the many colorful old buildings caught my eye, so I tried two small street scenes.  I'm anxious to see what the April location is.

We had a beautiful morning and a lot of options for a recent paint-out in Pasadena.  Our location was the "lower Arroyo Seco".  The last time I painted there was when the special, huge, white Matilija poppies were blooming which I posted in More Matilijas!  This is quite an extensive area with views of our beautiful old bridges, and the casting pond, or pool.  There is one small building which is the home of the Pasadena Casting Club.  It seems to be very active, and when I arrived two volunteers were weeding and planting some decorative plants, hoping the gophers wouldn't eat them.  I think the casting pond has such a mysterious, peaceful look.  It's a wonderful shade of green, reflecting the surrounding trees, so I had to try a watercolor.  The water changed constantly, a challenge! 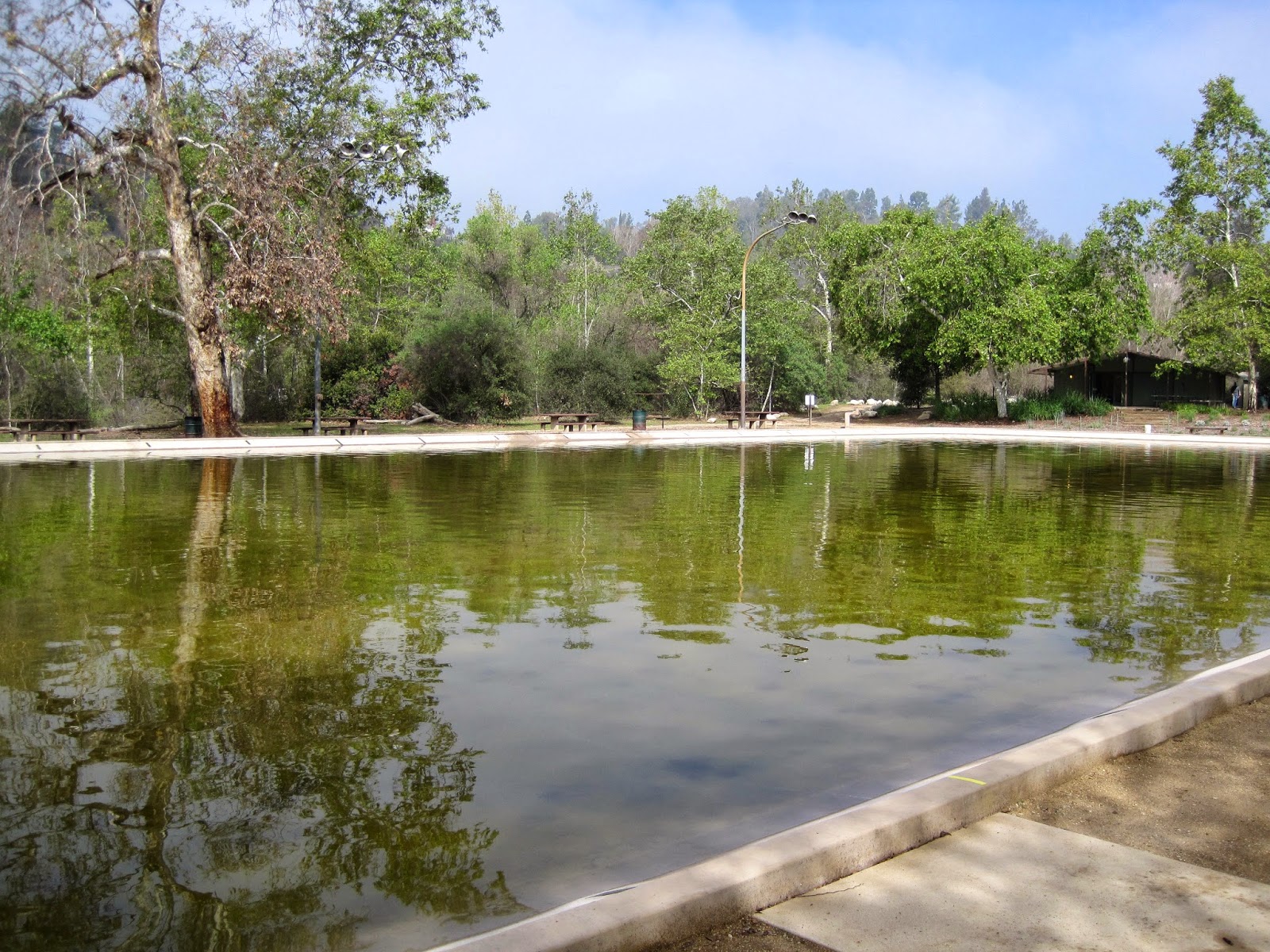 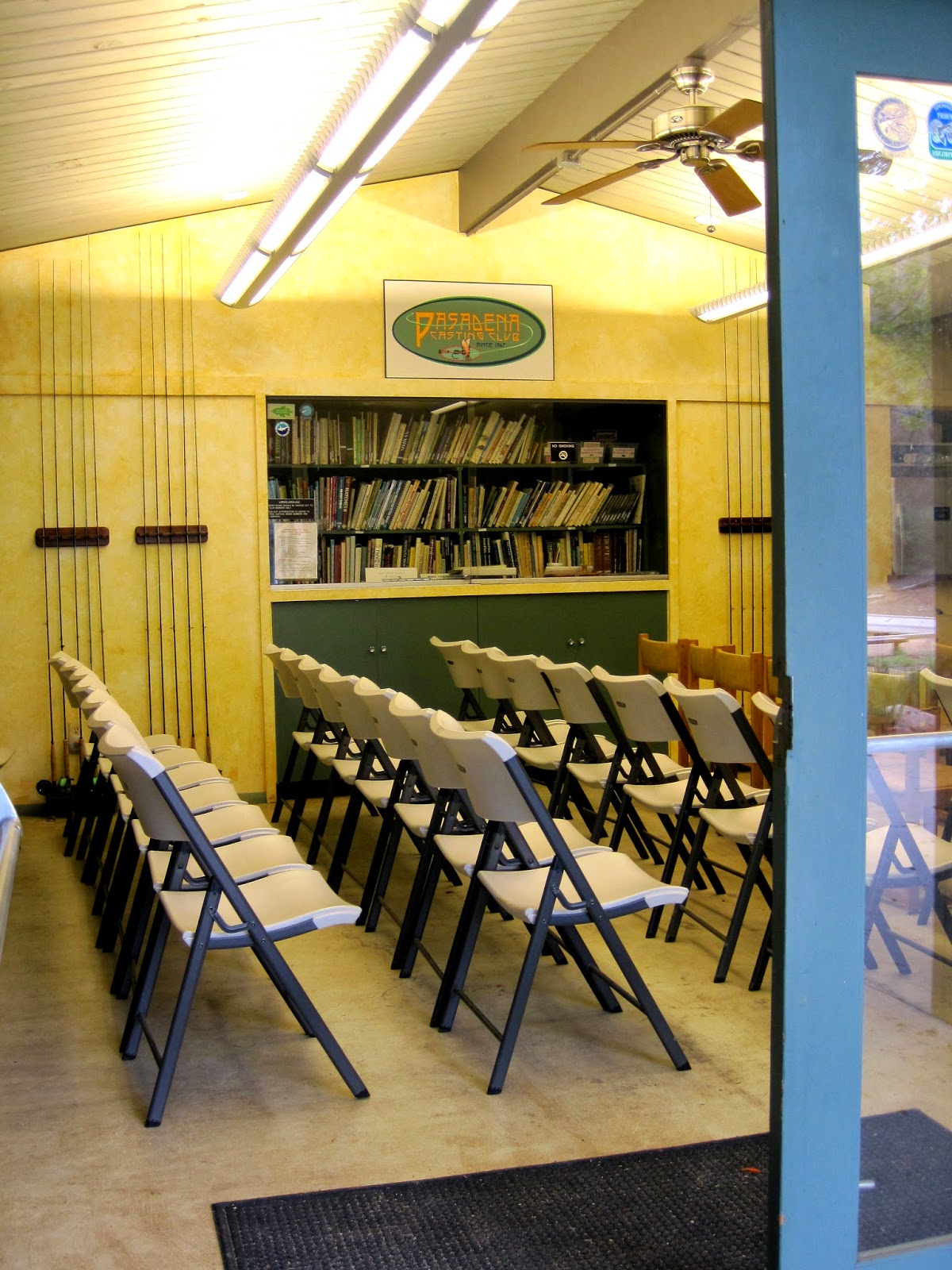 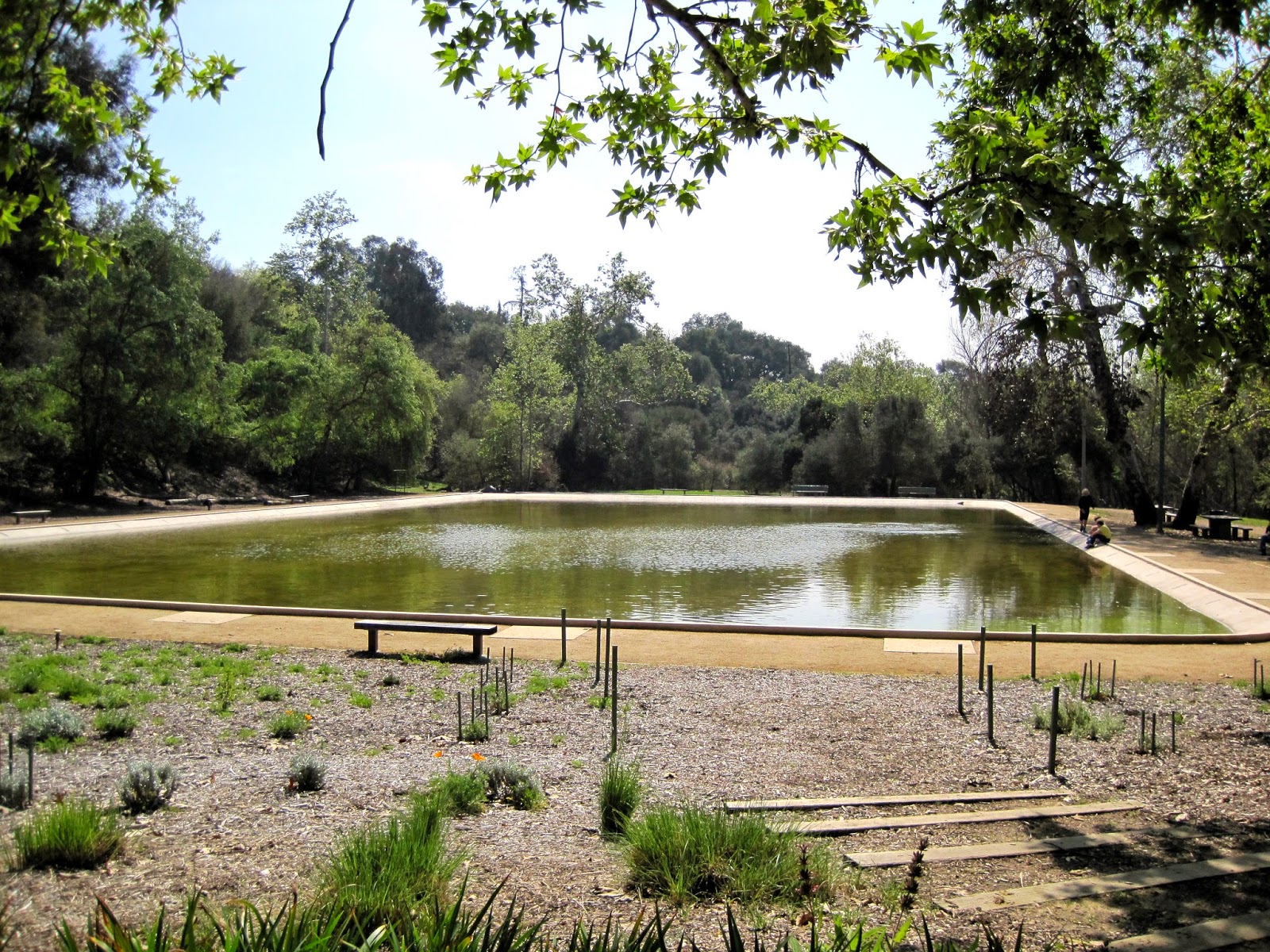 It was a cloudy and dreary day when one of the paint-out groups met at the Los Angeles River.  It was my fourth time painting there.  I blogged about my first two paintings at the river in L.A. River.  I've also painted from another location which I wrote about in Observatory View.

Since I've painted at the location before I had in mind to cross the footbridge and find a view from the west side of the river.  I crossed the bridge but didn't find a view that appealed.  So I settled on the still-fall foliage and some pretty white ducks that were spending the morning near us for my watercolor.  I do like to include urban scenery like the huge transmission towers too.  I only had to visit the car once to use the heater to dry my first wash...very handy.  Just blocks from busy city streets, it's such a beautiful and peaceful setting to visit with a lot of wildlife activity. 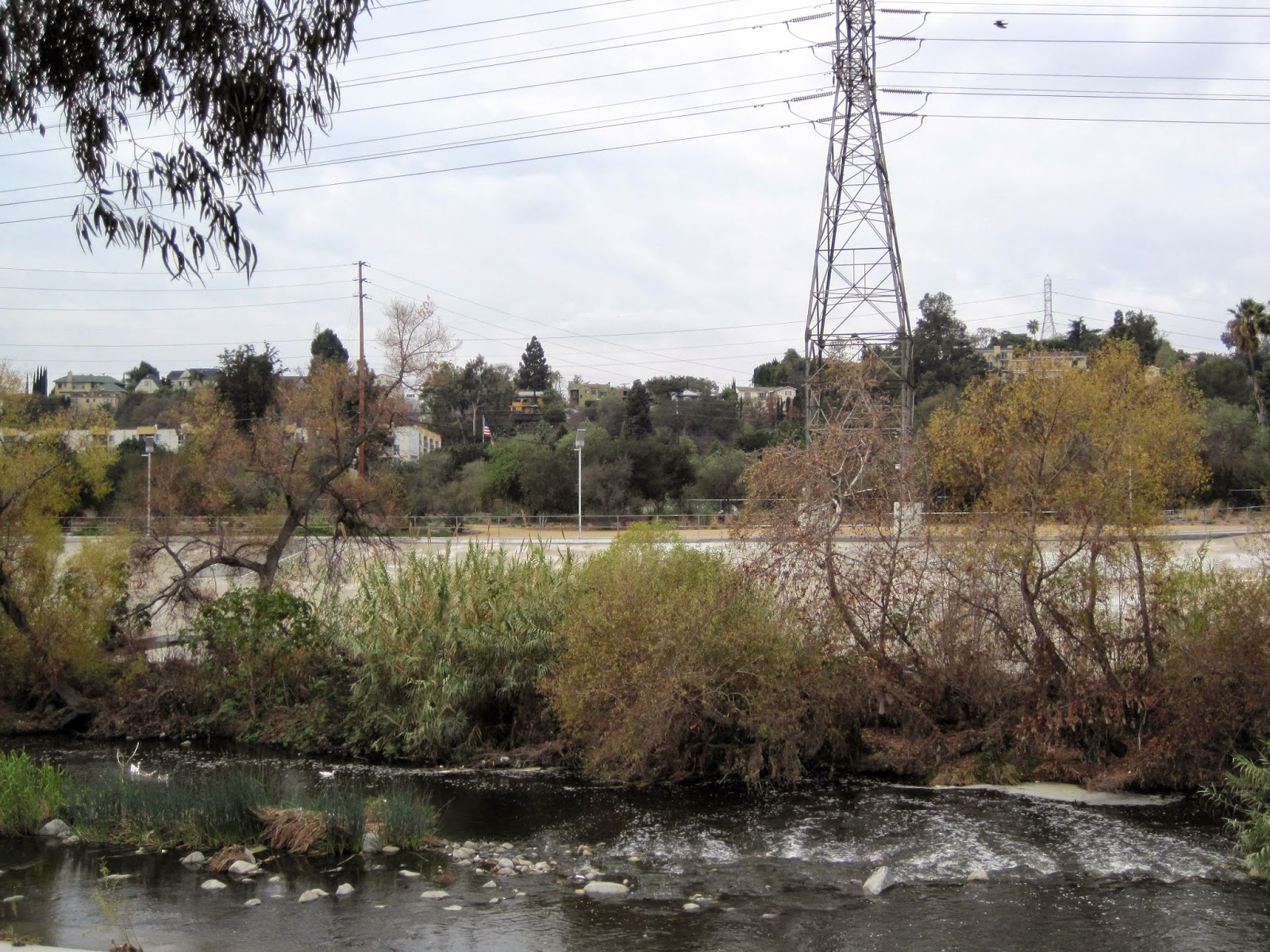 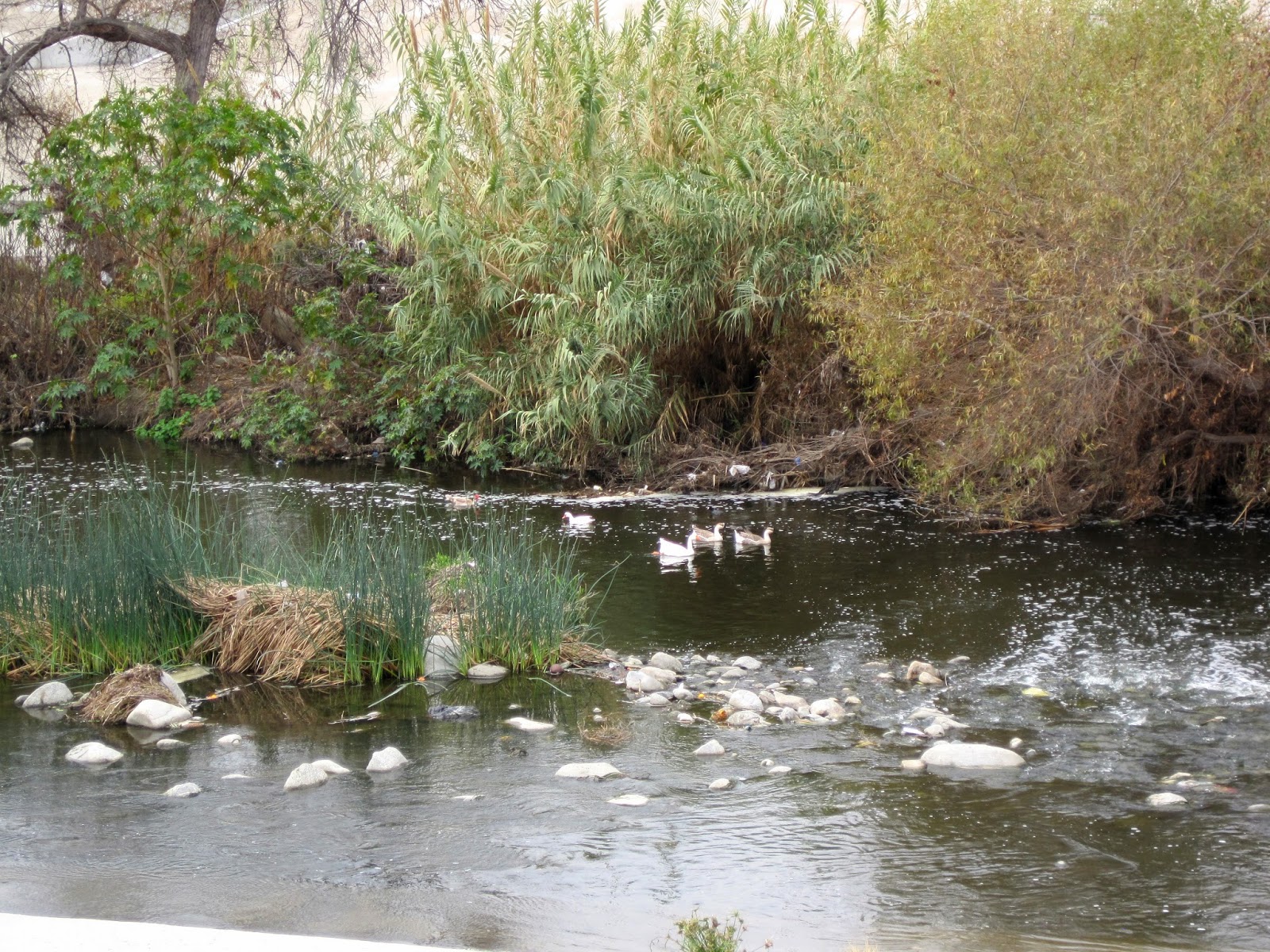 Our Friday paint-out group made a change from our planned location this week.  One member emailed a photo of the tulips blooming at Descanso Gardens.  We thought the flowers might not last long with the forecast warm weather so we agreed to make the change.

As promised, the tulips were so beautiful and colorful!  There were many photographers enjoying the opportunity for some great shots.  I've written five previous posts about painting at Descanso Gardens in La Canada-Flintridge, listed in "Labels" on the right.  One of my favorite Descanso paintings was a gouache piece of the stream with a white koi that kept swimming past me, Descanso Koi.  On Friday I walked to a more distant and quiet bed of tulips.  Crossing a bridge over the stream where the koi was still swimming by, I found a view of the tulips that I liked.  I usually try to choose a view with a foreground, middle-ground, and background so I  didn't paint a close-up of the tulips, but I hope the feeling of them is there. 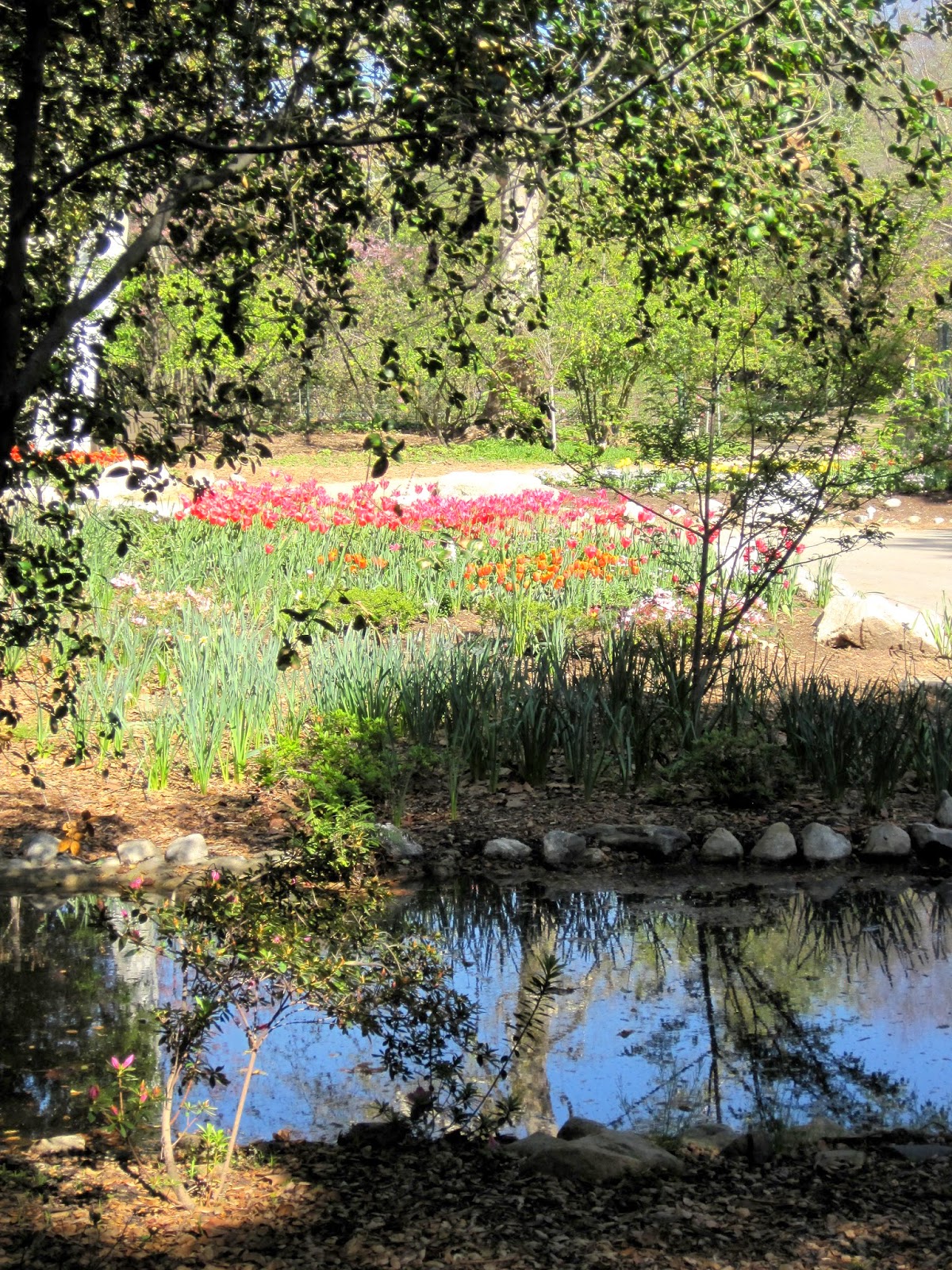 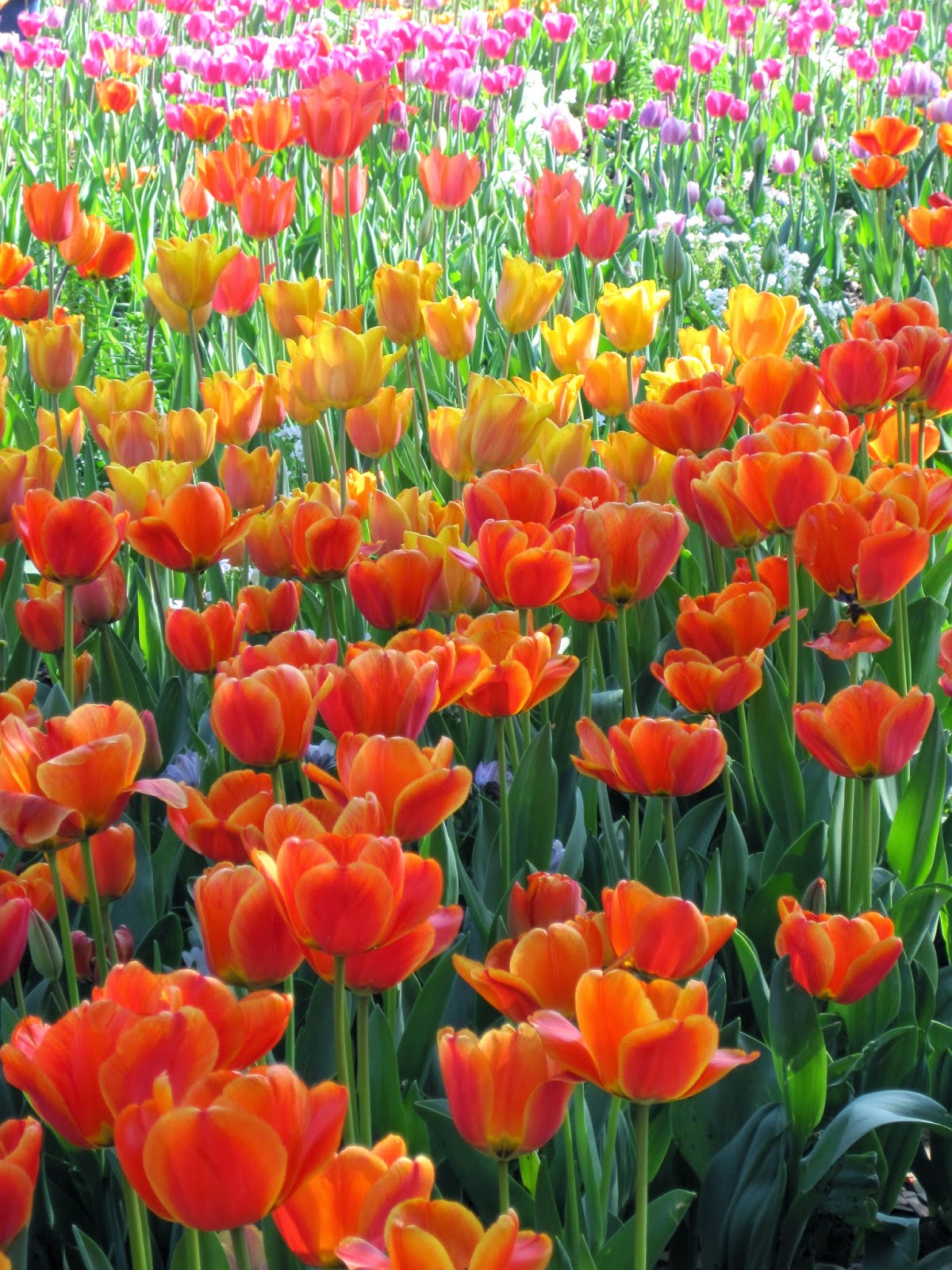 Return to the Power Plant!

It's been a month or so since we were at the Pasadena Water and Power plant.  I started a gouache piece that day that I haven't finished.  But the Saturday group is returning this week so I'll post my watercolor from our recent paint-out there, and I'm looking forward to finishing the gouache.

This was my second time painting from the cul-de-sac, and I posted that first watercolor in The Power Plant.  I really like this type of industrial subject to paint.  I was apprehensive on my first visit about painting the complicated looking structures but thought I'd better give it a try this time.  I've been including figures in my pieces where I can but a figure in this watercolor didn't seem to fit.  There were no pedestrians around.  A project is underway for which the plant will be remodeled, reconfigured, and updated.  Plus, it also appears that they want to close the cul-de-sac which is so convenient for plein-air painters.  I'm looking forward to our paint-out this weekend! 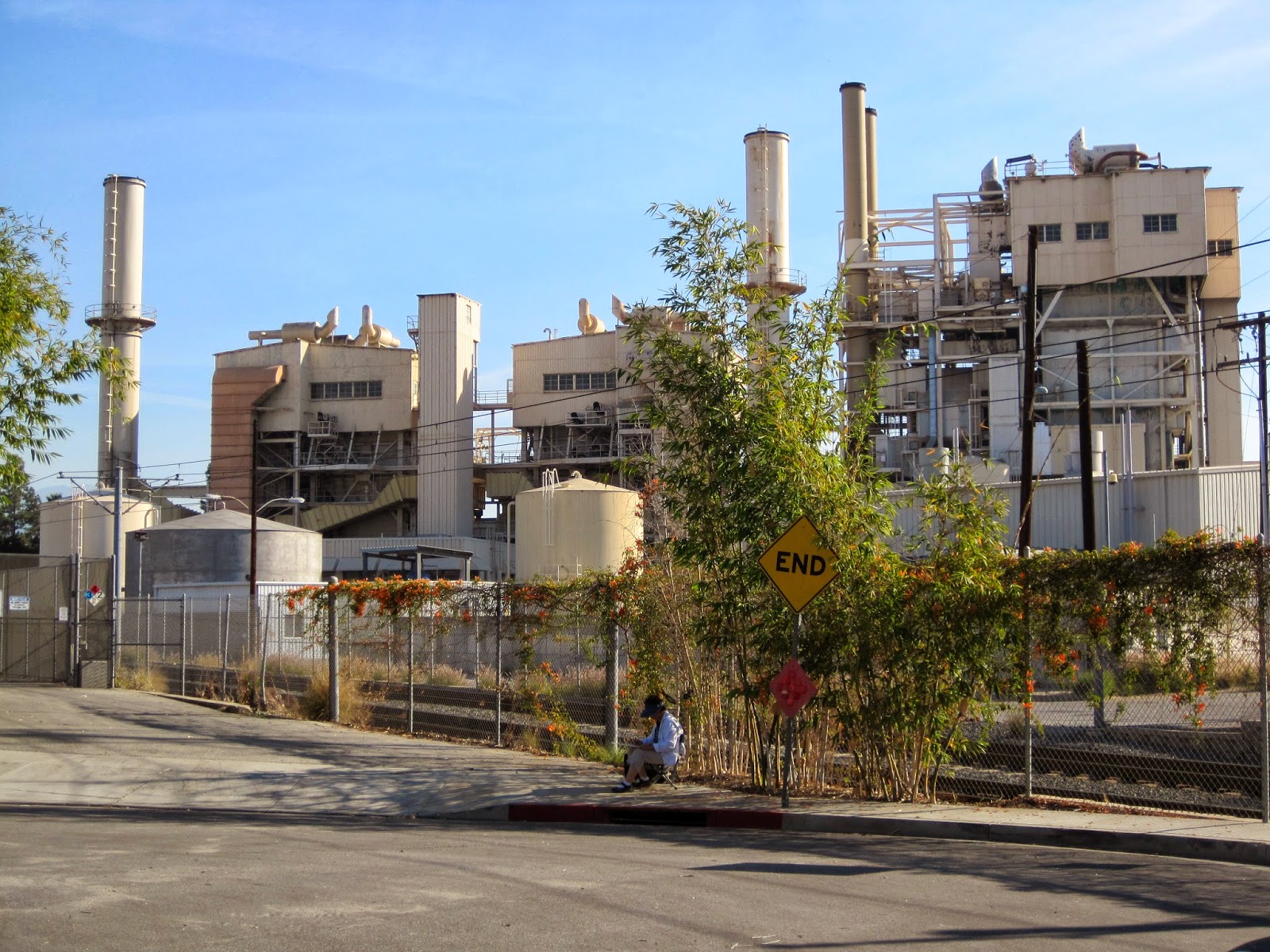 The Saturday paint-out group was back at Vista Hermosa Park a few weeks ago.  It's hilly and located on the outskirts of downtown Los Angeles so of course there are great views of the many tall buildings.  The only other time I was there was for our previous paint-out last winter.  I posted that watercolor in Vista Hermosa Park.  That morning paint-out was between rain storms for us painters.  This year, our winter has been lacking the normal rainfall and we had a beautiful, sunny day for painting.

The neighborhood surrounding the park is old with homes that have a lot of character.  But I felt like trying another watercolor of the growing number of tall downtown buildings.  Construction is underway on a new skyscraper which will be the tallest building on the West Coast.  Future downtown views from the park will have a new landmark. 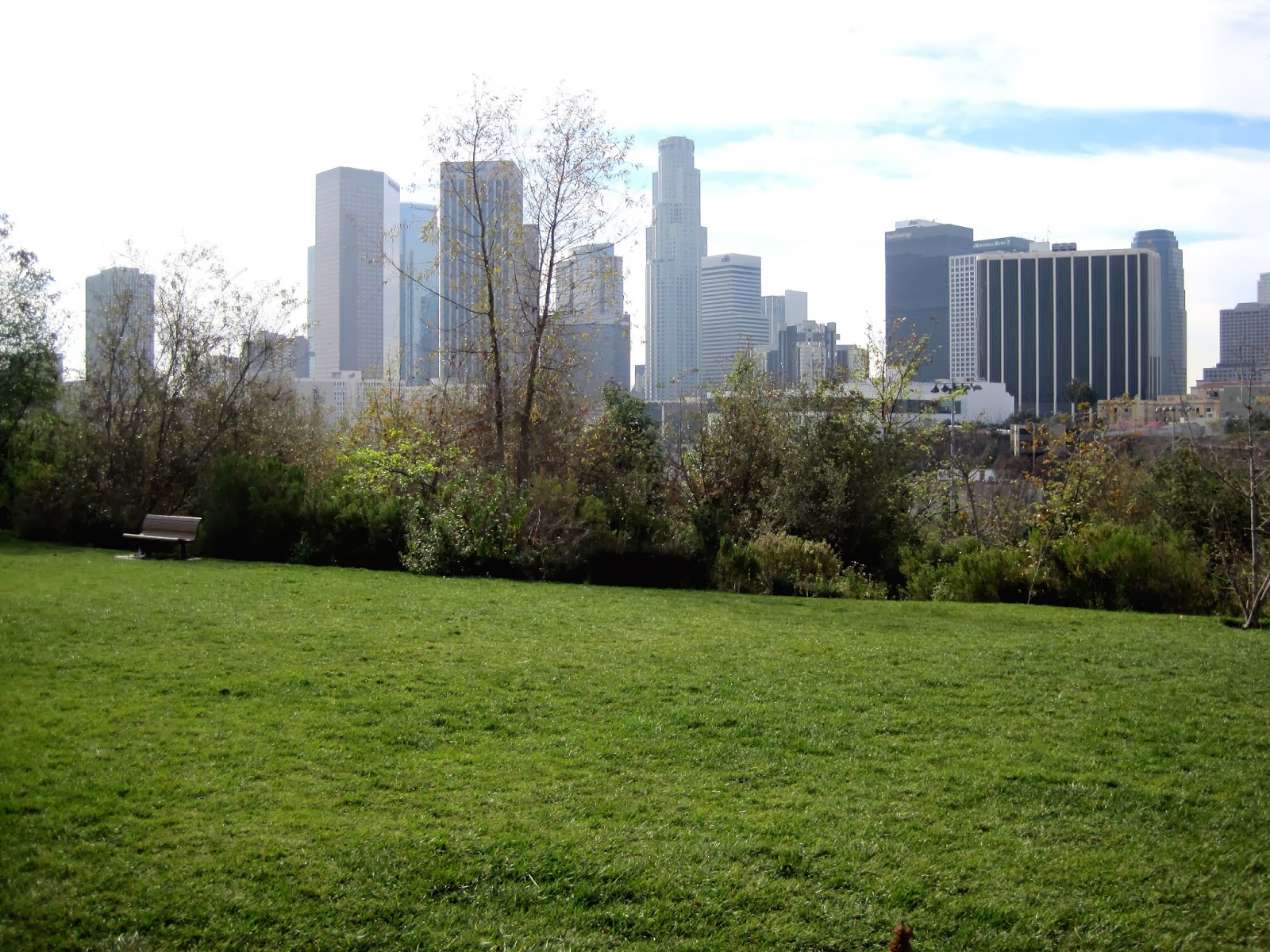 We had a beautiful day for a paint-out at the San Gabriel Mission (1771).  My second plein air paint-out was at the Mission in March 2012.  The watercolor I painted that day is posted here in Painting in San Gabriel.  Many in the group that day painted inside the walled garden area and I tried a painting of the grape arbor.  When the sun came out it was confusing with too many shadow patterns!  I learned my lesson.  So when another plein air group met at the gardens recently I had to choose a different view.

The gardens are ancient and peaceful, between classes of school kids on field trips.  There are many courtyards and shaded patios which used to be the center of the active mission community.  Just the top of the Mission campanario (bell wall) with its six bells is visible from the garden, which I thought of trying.  I settled on a garden within the gardens, the Peace Garden which features a hand made tile piece of Our Lady of Guadalupe.  There were also pretty vases with flowers, making a busy scene which I thought would be best to try with gouache.  Another fun paint-out! 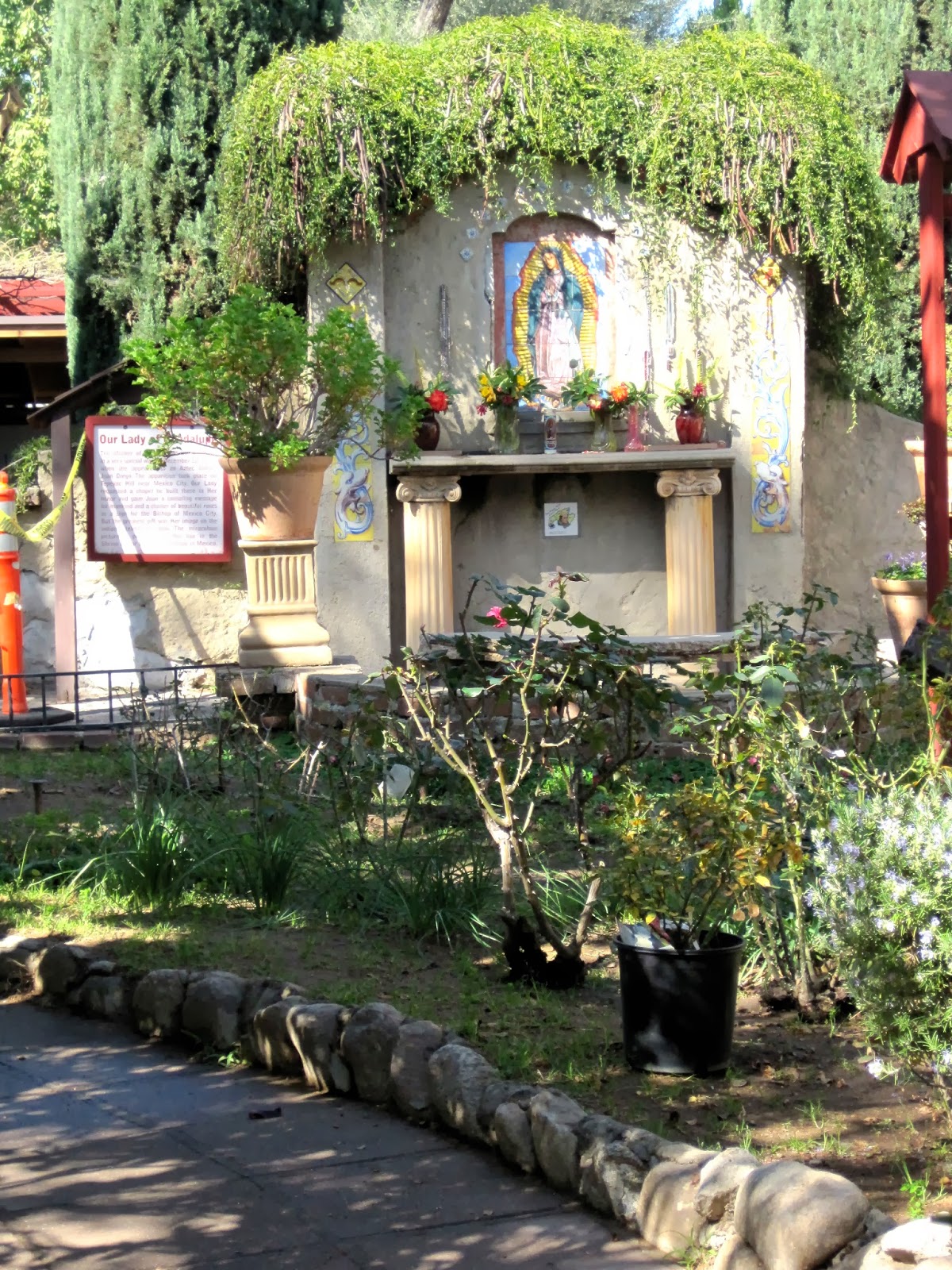 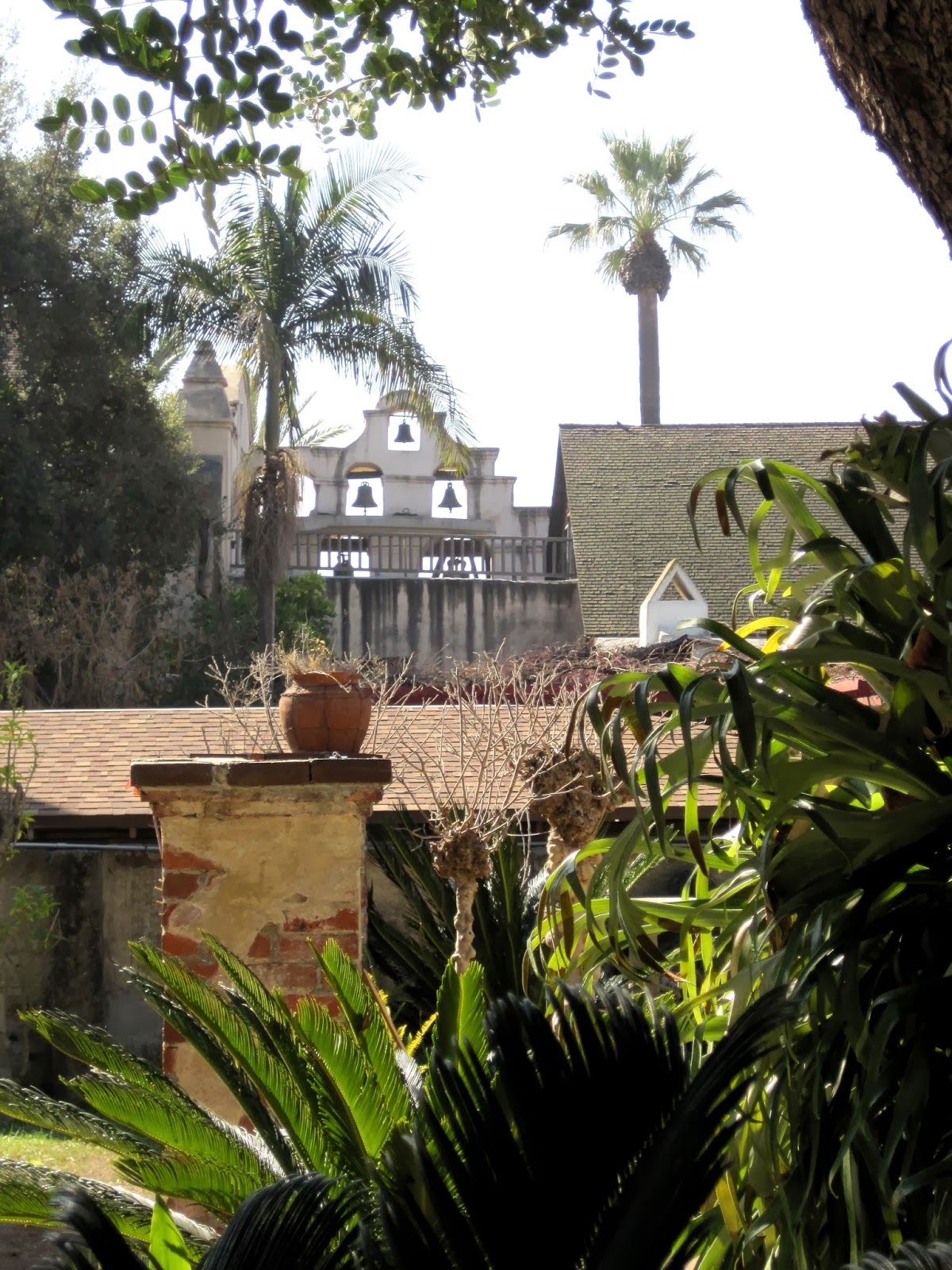 February 2014 was the 5th anniversary of the Virtual Paintout, created and hosted by Bill Guffey.  This was the 19th Virtual Paintout I've participated in.  The location was Washington D.C. and it was such a fun place to look around using Google Street View.  As always, it's hard to stop browsing and decide on a couple views to paint.  Washington D.C. has so many varied areas from government buildings to charming old neighborhoods.  A hard decision!  And there was also a gorgeous Chinatown gateway I had to try when I saw it.  In my other piece I included a bicycle leaning against a sign post...my first bike.


There is more to my Washington D.C. Virtual Paintout post.  I subscribe to the SHORPY blog, the 100-Year-Old Photo Blog.  Today's (April 8, 2014) email photo from the Historical Photo Archive is of this same building and alley, photographed in 1952, that I chose above from Google Street View in Februrary!  This is the strangest coincidence!