In my previous post, we were painting Near the Rose Bowl.  Just a few feet away is the Arroyo Seco Flood Control Channel.  It seems like I've been painting near flood control channels frequently since going out with the L.A. River paint-out group and, as always, our adventurous Saturday plein air group.  So on a recent Saturday, about two miles south of the Rose Bowl Stadium, the group met next to the channel because we've found the pretty Matilija poppies there.  The poppies were blooming out in the sun where they like to grow.  Unfortunately, I don't like to paint in the direct sun.  There was one, lone tree next to the channel which we all painted under.  And we chose other views to paint rather than the poppies.  I chose the hillside opposite the tree.  Dog walkers were a constant sight and it was fun to add some.  There wasn't a drain in the channel walls at that point so I had to find another drain that I felt my painting needed.  The one I found had a sweet little cat napping under it.  I hoped she has a better home than the channel. 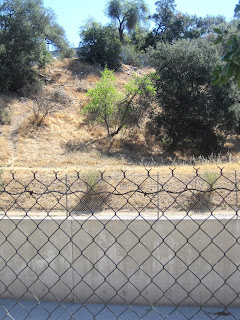 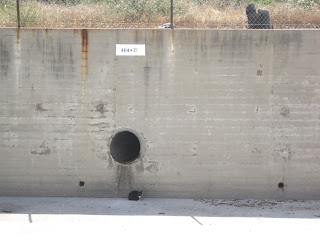 Posted by Sherry Schmidt at 5:29 PM